What is a nerve?

Nerves are the signaling structure between the brain the rest of the body. A nerve consists of a bundle of many individual nerve fibers all wrapped in a nerve sheath. The nerve sheath is very similar to the insulation around electrical wires and serves a similar purpose, to protect the nerve and facilitate the message between the muscles and the brain. Motor nerves allow the brain to signal muscles in the body to move voluntarily. Sensory nerves carry messages back to the brain indicating pain, pressure or temperature.

What is nerve compression, and what causes it?

Nerve compression, also called nerve entrapment, is a condition caused by pressure on a major nerve. Pressure or stretching injuries can cause individual fibers within the nerve to break without damaging the nerve sheath itself. This may interfere with the nerve’s ability to send or receive signals. Other causes may be congenital or developmental conditions that cause a strain or compression on the nerve resulting in injury to the nerve fibers. Space occupying structures such as a tumor or cyst, bony prominence, swollen tendon, post-operative swelling or swelling after an acute injury can create pressure on certain nerves, leading to damage and disruption of the nerve signals.

What are common sites for nerve compression?

What are the symptoms of nerve compression?

Nerve pain is typically described as a burning pain “like fire” or electrical shock like pain. This is different than the dull ache of muscle pain. The affected area may tingle, feel numb or have intense sensitivity to heat or cold. If motor nerves are affected, the muscle groups will be weak and eventually become ineffective (e.g., foot drop).

What is nerve decompression?

Nerve decompression is any operation that relieves pressure on a nerve, including a nerve release.

Here is the surgical technique to decompress the peroneal nerve near the knee: 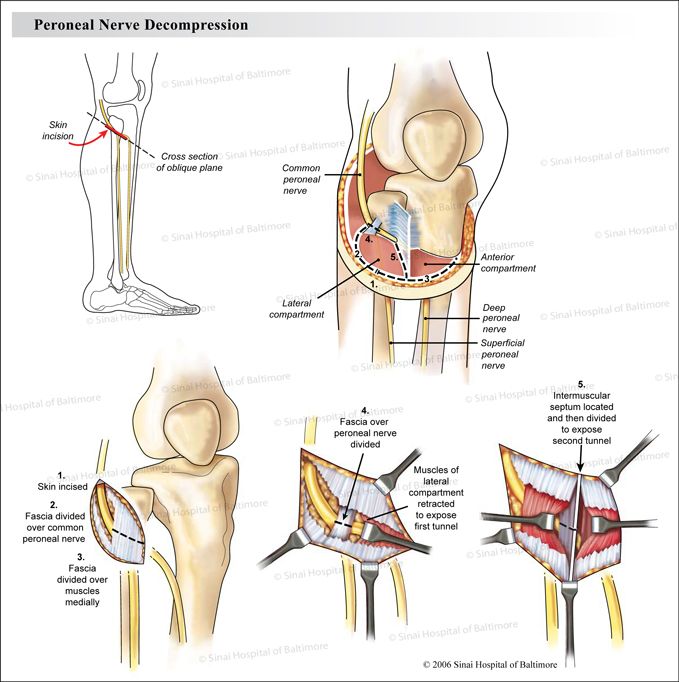 The peroneal nerve can become entrapped at two points. The first entrapment point is at its entrance to the peroneal muscle fascia. Incision 1: Make a short oblique incision at the level of the neck of the fibula in line with the course of the nerve. Incision 2: Incise the superficial fascia and identify the nerve outside of the fascia. Incision 3: Make a tranverse incision in the lateral compartment fascia. The incision should extend across to the anterior compartment fascia. Incision 4: Retract the peroneal muscles medially, which will allow you to see the underlying fascial band that passes over the nerve. Cut this band to decompress the first entrapment site. Incision 5: The deep branch of the peroneal nerve passes under the intermuscular septum between the anterior and lateral compartments. The septum comes down on this nerve like a guillotine. Isolate and cut the septum to decompress this second entrapment site. The nerve is now fully decompressed.

What happens during a nerve release?

Once your doctor has identified that there is nerve entrapment, he/she may recommend a nerve release. During this procedure, tight points that are applying pressure on the affected nerve are released. The surgeon releases the area that is causing the disruption of the nerve signal, like unroofing a tunnel, and allowing the nerve more room. The tissues that are compressing the nerve are typically collagen bands or ligaments. In some cases, nerve releases are done as a preventative measure to prevent an expected nerve compression that may result from an elective operation such as an osteotomy.

What is the recovery time for a nerve release?

Most nerve releases are performed as an outpatient procedure and do not require an overnight stay in the hospital. Many nerve releases are performed in conjunction with more complicated procedures that may require additional time in the hospital. If performed alone without any other additional procedures, there are no weight bearing restrictions after a nerve release, and most patients are encouraged to start walking immediately after surgery. Early mobilization is important to reduce swelling and prevent joint contractures. The skin incision will heal in 1-2 weeks. Depending on how severe the underlying nerve damage was prior to surgery, the nerve symptoms may be alleviated immediately after surgery, or it may take months for the nerve to fully recover.

Click here to learn why patients choose to be treated at the International Center for Limb Lengthening.