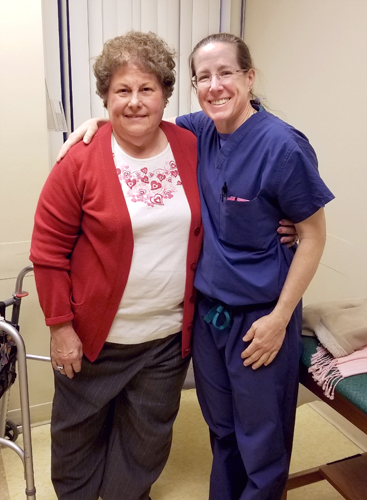 “Because of Dr. Conway, she has her leg,” Lori said during one of her mother Sue’s check-up visits. Sue explained that in 2014, she started to notice her ankle was swelling. After testing for clots didn’t show any problems, Sue had a CAT scan that detected a tumor in her thigh muscle. The tumor was removed, and then Sue underwent six radiation treatments. Later, while out shopping, her leg gave out and she fell, fracturing her femur (thigh bone). A rod was put in her leg, but the wound would not heal. Her doctors began questioning if her leg could be saved.

Sue was referred to Dr. Conway for her expertise in fighting infection. Dr. Conway planned to clean out the infection, but during surgery she discovered that the radiation had caused the bone to deteriorate and a lot of the bone was dead. Very little of Sue’s femur remained. Dr. Conway took out the existing rod, and had to put a new rod in that extended from Sue’s hip to her shin. This left Sue unable to bend her knee due to the rod, but her leg was saved, and she still had use of her hip and her foot. Sue began intensive oral and IV antibiotic and hyperbaric oxygen treatments and eventually her wound healed.

Lori says that during that treatment period, “Any time we had concerns or questions, I was able to text Dr. Conway directly. It was very comforting and helped us get answers quickly to things that couldn’t wait. She was very timely in responding. It was great.”

Today, Sue is proud of her independence and her ability to keep up with her three great-grandchildren. While she can no longer work as a hairdresser, her career for fifty years, she reports that she gets around well with her walker. “I’m still independent—I cook, clean, do the laundry. I decorated for Christmas. I just can’t get on a ladder or drive.” At a visit in early 2018, she mentioned she was going to look into getting special adaptive hand controls for her car so she could eliminate one of those limitations. A year later, she succeeded, and she is now able to drive her van.

Sue concludes, “I’m always telling people to come to Dr. Conway for bone and infection issues. I praise her very much. She has been a godsend to me.”