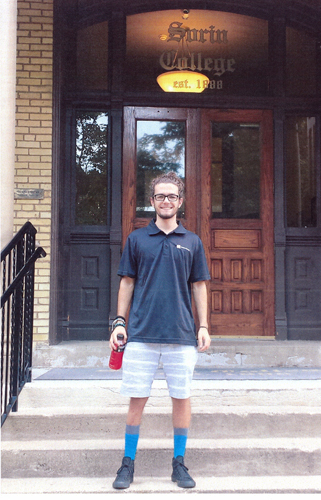 Christopher, now a student at the University of Notre Dame, was born with both fibular hemimelia and congenital femoral deficiency, and the first doctor his mothers took him to suggested amputation. They investigated other options and identified only five doctors across the country who would provide treatment to save his leg. “We called and set up appointments, and chose Dr. Herzenberg. We really liked him. He was a little more progressive than the others.”

Christopher had his first surgery with Dr. Herzenberg at the age of 14 months. Over his childhood he had several external and internal lengthening treatments and reconstructive surgeries.

When asked how treatment at the International Center of Limb Lengthening had changed his life, Christopher broke out into a wide grin and exclaimed, “I can walk!” He continued, “I haven’t really run into anything I can’t do. Sometimes I have to make small changes—adjustments to make it possible. For example, I played tennis for a long time. Once the coach said to point my toe, and that wasn’t possible, but you find ways around it. I also ice skated and had special lifts made for the skates. I just participated in a boxing tournament fundraiser. Any of these activities I couldn’t have done otherwise….I think I came out pretty alright. It wasn’t traumatizing.”

Sinai Hospital’s Visitor Policies have changed. Please click here for the most up-to-date hospital visitor policies. Please note that there is one modification for our inpatient pediatric patients; two parents/guardians are allowed bedside during a child’s inpatient stay.