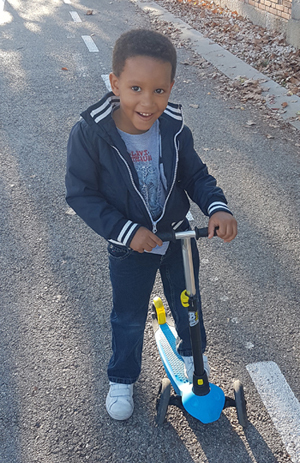 “Before the surgery, Leo had no balance and felt tired. Now it his parents who are tired!” his father Benjamin said with a laugh. “He is living a normal life. He’s not the fastest, but he’s the strongest child in his school.”

Leo was born with congenital femoral deficiency, a rare condition where his hip was deformed and one of his legs was significantly shorter than the other. When his doctors in Spain recommended amputating the shorter leg, Leo’s family sought out Dr. Shawn Standard at the International Center for Limb Lengthening.

Dr. Standard performed rotationplasty surgery, rotating the lower leg and foot 180 degrees so Leo’s foot is positioned where his knee used to be, with the heel portion in front and the toes pointing backwards. Placing the ankle joint in the position of the knee creates a functional knee for Leo. His foot then fits into a prosthesis. The end result leaves Leo with greatly increased mobility compared to the more traditional above-the-knee amputation and prosthesis. Go Leo go!