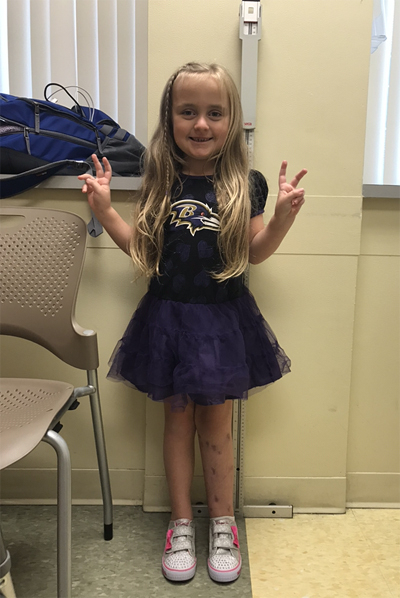 Ally was born with posteromedial tibial bowing, a very rare condition where the top of her foot was curved up so it was almost touching her shin bone. As Ally grew up, her foot started to straighten, but she was left with one leg that was shorter than the other and out of alignment.

Ally’s mom Dawn shares, “The ICLL (International Center for Limb Lengthening) changed Ally’s life…. We found out that Ally had an issue with her left leg at our 20 week ultrasound.” The genetic specialist said she thought it was posteromedial tibial bowing and calcaneovalgus foot, but sent Dawn and her husband to another hospital’s head of pediatric orthopedics for confirmation. The doctor confirmed the diagnosis, but both then and at a visit after Ally was born, said the only treatment option was to wait for the leg to straighten as it grew, come in for annual X-rays, and that they could do a surgical procedure at age 11 or 12 to slow the growth of Ally’s opposite leg.

Dawn shares, “I had started researching the condition myself after I got the news at my 20 week ultrasound and found very little information about it. There were a few case studies from YEARS ago. The literature did confirm that the legs did generally straighten as they grew. But the lack of information was alarming and frightening. The condition was rare…. There was something wrong with my baby, but I could not research it simply due to a lack of information. And this was 2011! There were no support groups to be found—not even on social media. The PMTB Support Group on Facebook was started in 2013. My daughter’s pediatrician never heard of it. I asked her for some orthopedic doctors for second opinions. Some of them had never heard of it, and none of them had ever seen or treated it! I felt hopeless.” 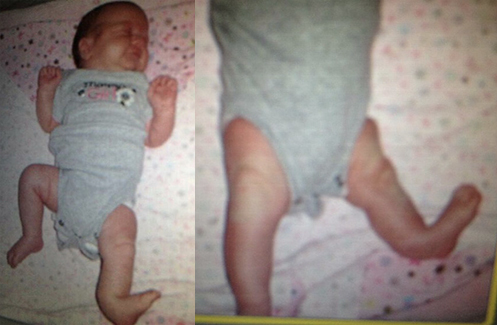 “By this time, Ally was born. Her foot looked terrible when she was born, but over time it did start to straighten. The condition did not affect Ally at all. She walked at 14 months of age, ran, rode her little bikes and scooters and did gymnastics. The only problem we had during her first year of life was trying to find a shoe that she could wear. So, back to Google I went. I wanted a second opinion with a doctor that had treated this condition before.”

“Then I came across Dr. Shawn Standard. I watched his YouTube videos, read everything I could on him and made our initial appointment. Upon meeting him, he was very friendly and immediately interacted with Allyson who was a few months away from her 3rd birthday. He pulled up her X-rays and gave us his opinion. He had treated this condition multiple times and was extremely knowledgeable. He answered ALL of our questions and did not rush us. He was patient, kind, and Ally instantly liked him. Honestly, we knew he would be Ally’s doctor within 30 seconds of meeting him. I know it sounds crazy, but we just knew. He gave us his cell phone number and told us to text him if we ever had any questions! Dr. Standard monitored Ally for several years then we decided it was time to go ahead with her straightening and lengthening surgery, an option that [the other hospital] did not even give to us!” 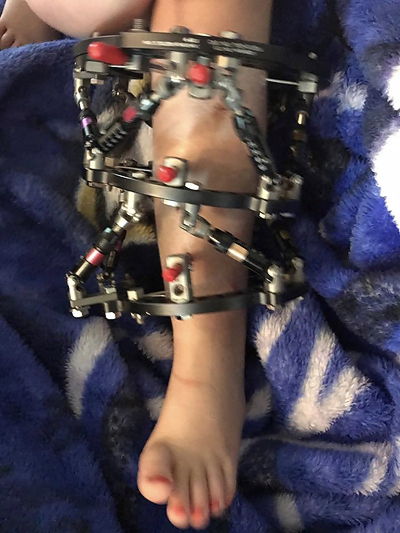 When Ally was 5 years old, Dr. Standard performed a double osteotomy. This surgery cut Ally’s shin bone in two places to allow her to grow new bone with the help of an external fixator. “Ally grew a total of about 6 centimeters of new bone!” her mom shared. After her external fixator was removed, she had a removable cast as the bone continued to heal. She later had a plate and screw inserted to help improve the alignment of her ankle, knee and shin bone. Dawn adds, “Her surgery was successful. It was a huge surgery, and it was not easy, but Ally now has 2 straight legs that are the same length! That is a huge improvement!”

She continues, “I would strongly encourage any parent of a child with PMTB to absolutely seek treatment for their child at the ICLL. First and foremost, both Dr. Standard and Dr. Herzenberg have both seen and treated this condition on numerous occasions. Since this condition is rare, it is important to be treated by a doctor who has treated it before. That was a top priority for me. The pediatric orthopedic doctors at the ICLL are top experts in their field. People literally come from all over not only the country, but from all over the world to seek their expertise. The thing about this condition is that every case is different, and [at the ICLL] each plan of care, each treatment plan, is individualized for each patient.“