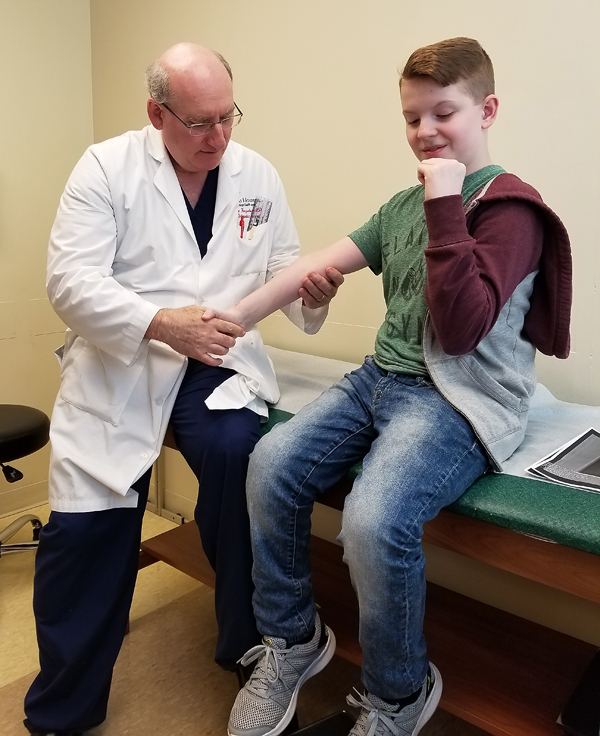 His father, Jason, shares that they first came to the International Center for Limb Lengthening (ICLL) by a local sports medicine doctor who did not know how to help Aaron; one of Aaron’s feet was rotated 90 degrees inward, and the doctor said perhaps they should consider amputation. Jason says, “Aaron became my whole focus. I didn’t know how to fix the problem. In a nutshell, when I came here, (the ICLL), I found hope. With Dr. Herzenberg, we found someone who could fix him to the best he could possibly be.”

Aaron has undergone several surgeries to correct his leg deformity and to lengthen his right arm and leg over the course of his childhood—most recently a humerus lengthening with an external Taylor Spatial Frame at age 14. He is happy to have activity restrictions lifted, and looks forward to being able to get back to playing baseball.

When Jason thought back to the point when Aaron was four or five before coming to the ICLL, he remembers: “One of my heart’s desires—the one thing I always wanted for him to be able to do—was to ride a two-wheeler bicycle. Well, one day I saw my son biking by and said to my wife that I needed to talk to Joshua (Aaron’s twin), because he was going too fast. My wife said, ‘That wasn’t Joshua—it was Aaron!’ It’s amazing–8 years later, and he is riding a bike.”

When asked what he would share with other families who have children with Ollier disease, Jason responds, “I would recommend coming to the ICLL whole heartedly. These people know how to deal with it. They make your outcome the best it can be for the situation…. Dr. Herzenberg comes to the table with the best game plan, in my book. I can’t be thankful enough for this institute. He’s not just helping my child. He helps thousands of people. I think the world of the Rubin Institute.”