Reconstruction of the congenitally dislocated patella is indicated when there are gait abnormalities. Many children with congenital patella dislocations present with knees that will not fully extend and are in a knock knee position. Unfortunately, the dislocated patella is often missed initially. Patients can anticipate improved alignment and gait after reconstruction. 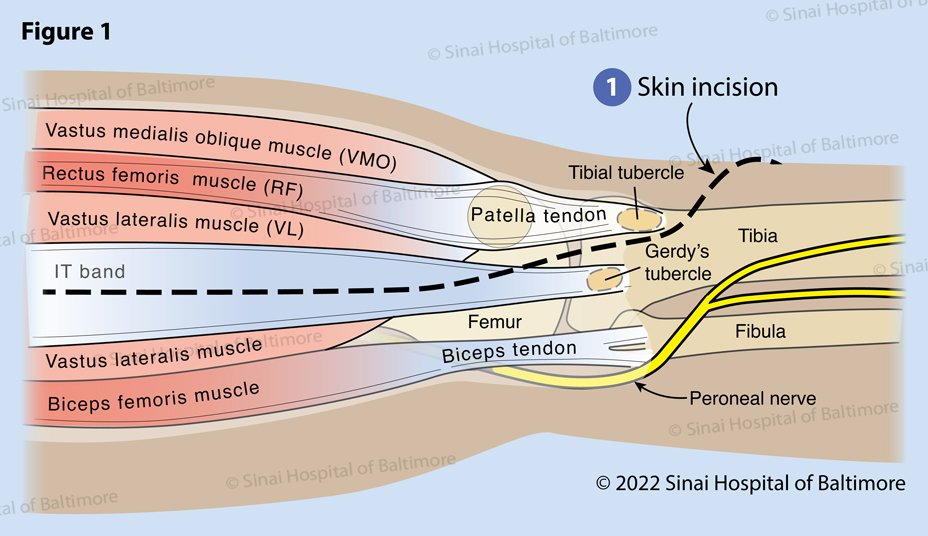 Figure 1. Complete reconstruction of a congenitally dislocated patella requires access to the lateral origin on the quadriceps muscle, the iliotibial (IT) band, the biceps femoris muscle (most posterior and lateral muscle in the thigh), the peroneal nerve, the patella, the patellar tendon and the tibial tubercle, as well as the medial portion of the quadriceps muscle. All of these structures can be accessed through a single incision (1) that begins laterally on the thigh, curves anteriorly just above the joint line and becomes directly anterior over the tibial tubercle. This incision is carried down to the lateral fascia of the thigh and the iliotibial band. The patella is dislocated laterally on the femur and is typically quite small. 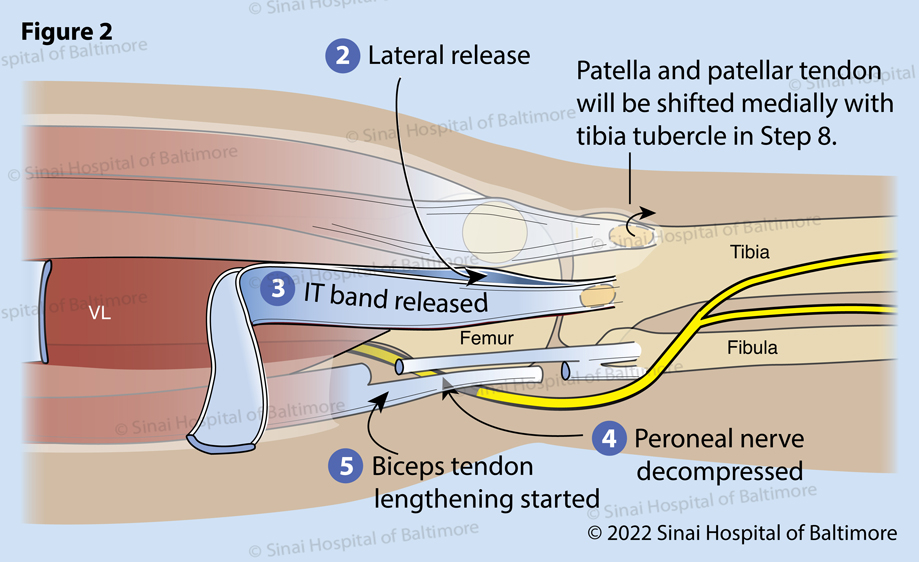 Figure 2. An incision in the fascia is completed anterior and posterior to the thickening of the IT band. (2) The surgeon feels the insertion of the IT band onto the tibia at Gerdy’s tubercle to determine the optimal position of these openings. The IT band is then separated high in the thigh, often through a separate small incision (3). This is protected for later reconstruction for knee stability. The peroneal nerve is identified posterior to the fibular neck and is protected along its course from the posterior thigh to the anterior leg around the fibular neck. Tight tissue bands are released to allow repositioning of the leg without placing undue pressure on the nerve (4). This is particularly important in patients with flexion contractures, knock knees and rotational dislocations of the knee. The biceps tendon is isolated and lengthened in a “Z” fashion for later repair (5). 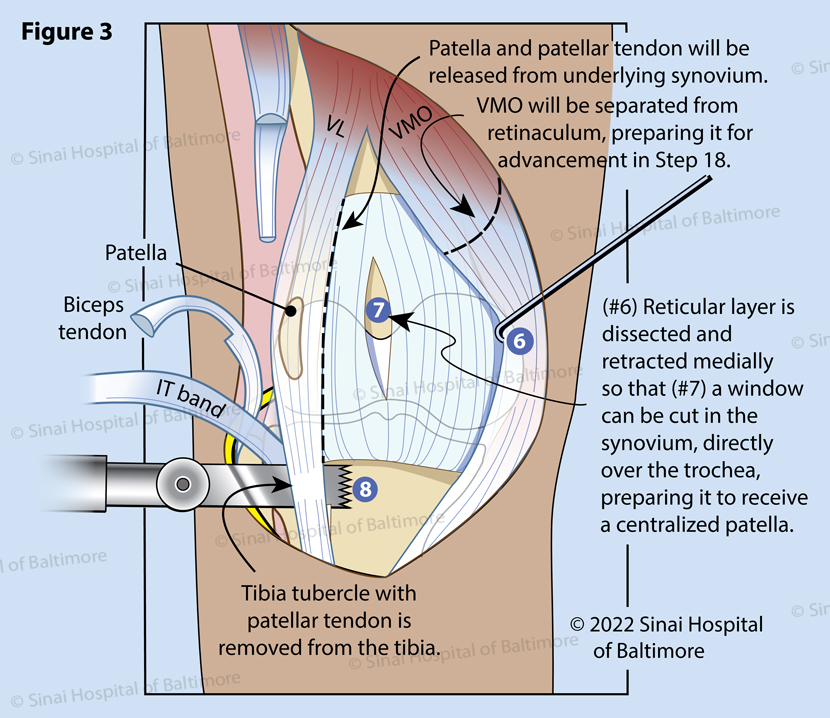 Figure 3. The patella is then isolated and separated from the synovial tissue, allowing transfer of the extensor mechanism (quadriceps tendon, patella, patellar tendon) medially into the center of the knee joint. Meticulous dissection is carried medially, separating the joint lining (synovium) from the overlying retinaculum and the vastus medialis muscle (VMO) (6). A synovial window is opened (7). The tibial tubercle is lifted off of the bone (8). 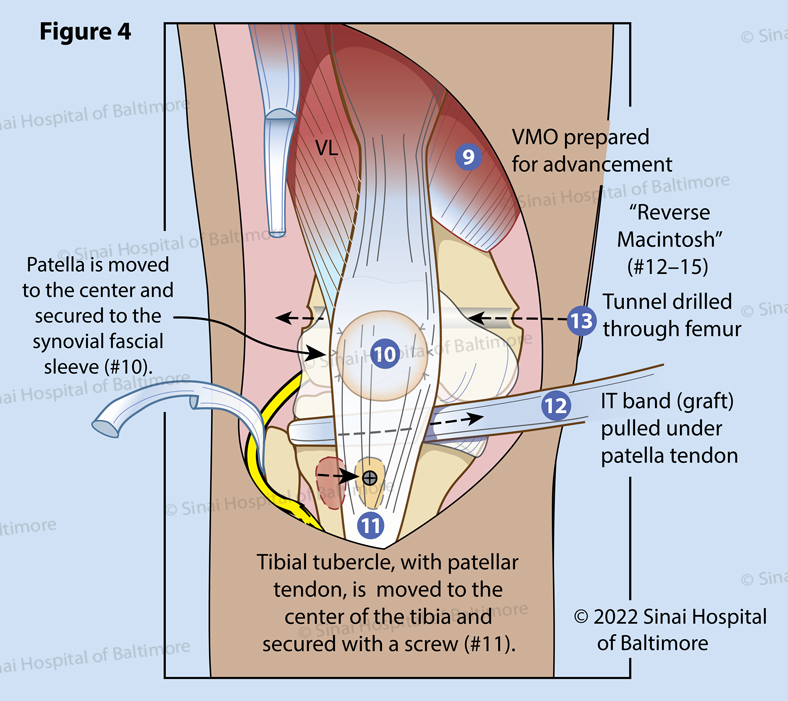 Figure 4. The VMO is isolated for later advancement (9) and transferred medially in most cases to allow a direct line of pull for the patella. The synovial window, opened by moving the patella medially, is closed with suture. An incision in the joint lining over the center of the knee is made, and the patella is transferred into the window (10). At this point, the patella is tracking centrally with flexion and extension. The tubercle is medialized to track (inline) with the synovial window (11). Reverse Macintosh, Steps 12-15: Knees with chronic deformities require ligamentous reconstruction to prevent recurrence of rotational dislocation of the knee. The IT band is passed under the patellar tendon (12). A tunnel is drilled through the femur (13). 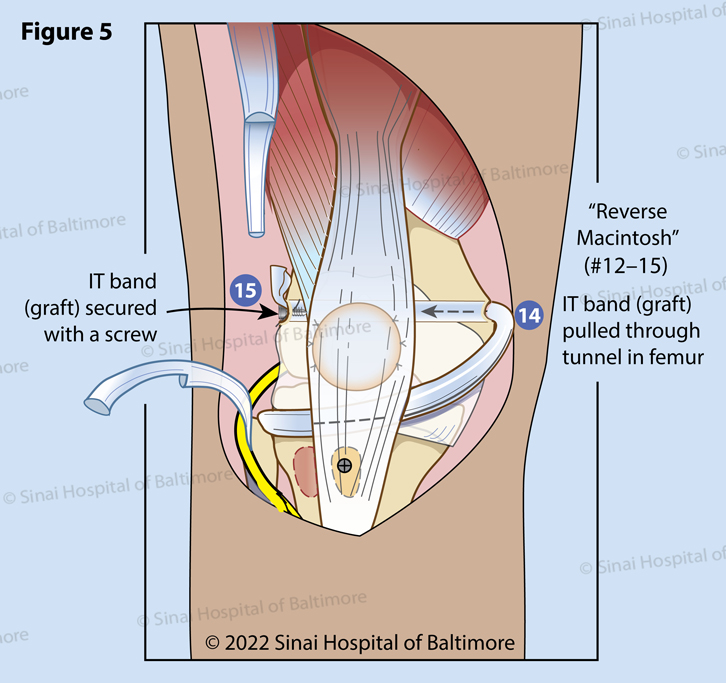 Figure 5 (Reverse Macintosh, continued). The IT band is pulled through the tunnel in the femur from the medial side (14) to the lateral side of the femur where it is fixed with a bone screw (15). 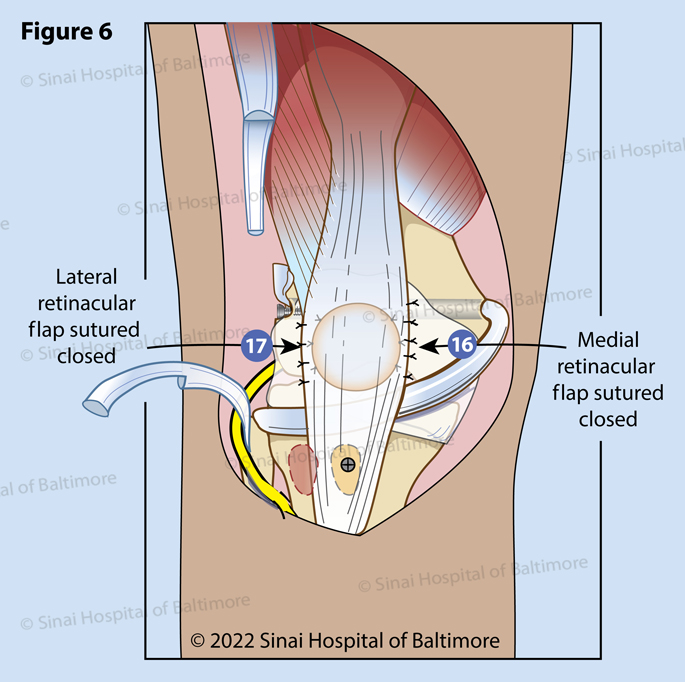 Figure 6. The patella is fixed to the synovium circumferentially (16) (17). 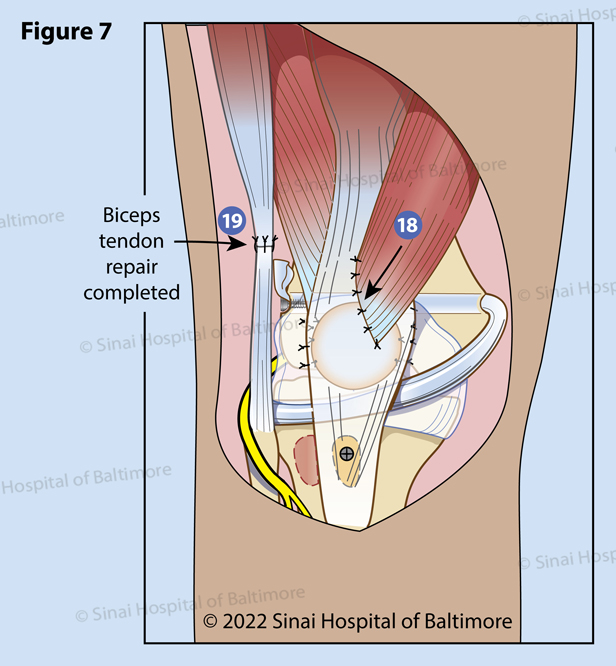 Figure 7. The VMO is repaired to optimize knee mechanics (18). The biceps tendon is repaired in full knee extension (19). The peroneal nerve is monitored while testing knee range of motion. Occasionally the knee cannot be fully extended due to the tightness of the nerve and therapy will be required. 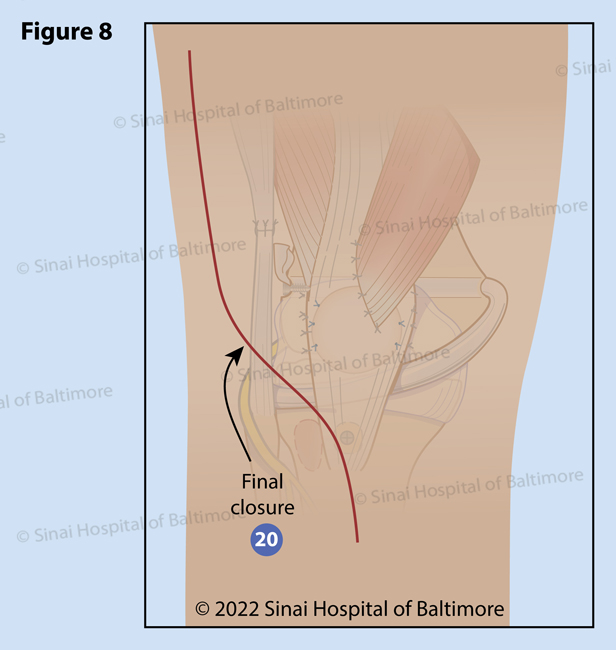 Figure 8. The incision is then closed (20). A long leg cast is applied to maintain the knee in a safe position to allow early healing.