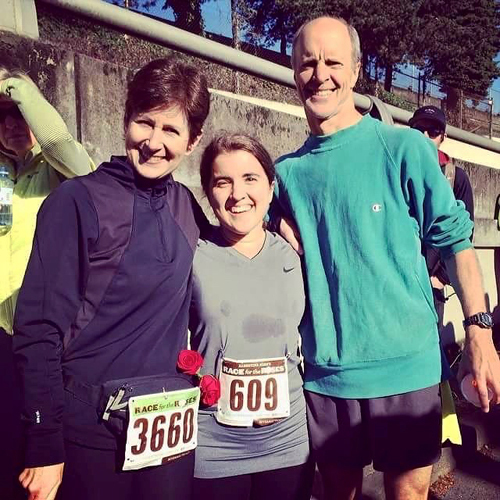 Hannah, now in graduate school to become a pediatric nurse practitioner, first came to the International Center for Limb Lengthening (ICLL) when her family, based in Seattle, realized that she would not grow taller due to hypochondroplasia, a form of short-limbed dwarfism. Searching for options for height growth in Hannah’s early teens, her family read about the ICLL in the Seattle Times. Hannah and her parents opted for an aggressive treatment plan where she lengthened both her tibias and femurs on both legs with external fixators at the same time, which ultimately resulted in her gaining 4 inches (10 cm) in height.

When asked how she was changed by her treatment, Hannah responds, “Functionally, it helped me with driving a car, reaching things, and fitting in my peer group. I’ve been able to run several half marathons. I also grew emotionally and spiritually. I grew in character and empathy. It gave me a lot of perspective and gratitude. It also inspired my career goals—wanting to help others.”

“Dr. Herzenberg was so encouraging. He believed we could do it. He was so diligent, so meticulous, calm and very wise. He answered all our questions and was a good listener. Every day was very hard, but he helped us see the bigger picture,” Hannah adds.

Her mom Julie was proud to chime in that in 2014—exactly ten years after her date of surgery in 2004—Hannah ran a half marathon in less than two hours. The picture of Hannah with her mom and her father, Kurt, was taken after this amazing race.

When asked what she would tell others with her condition considering treatment, Hannah responds, “You have to realize that for a few months it will be really hard, but in the long run, it is so worth it. You’ll gain a lifetime of benefiting from being taller and more confident. You also will get such great support. Everyone here [at the ICLL] encourages you and cheers you on.”

Coronavirus Update: December 7, 2020
We Are Open and Safe!